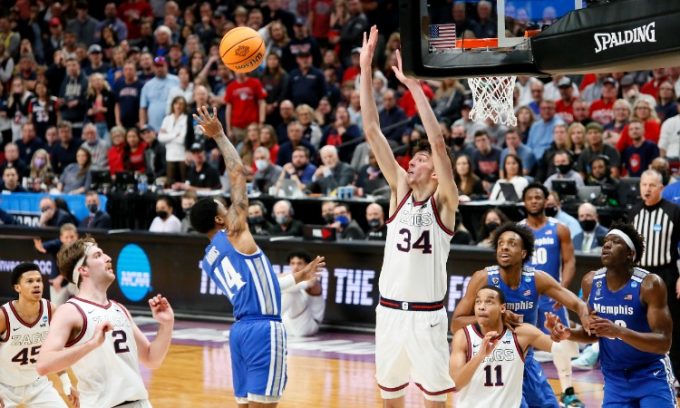 Here are the two numbers Detroit Pistons fans will be thinking about for the next five weeks or so: Fourteen and 52.1.

Those numbers represent the percentage chance the team will grab the No. 1 pick (14%) or, at minimum, one of the top four picks (52.1%) when the NBA Draft Lottery takes place May 17.

In short: The late-season semi-tankathon, where coach Dwayne Casey pulled his starters after the first half, worked well enough, “earning” the Pistons the best shot — along with the Houston Rockets and Orlando Magic — of walking out of the draft with the top pick.

Cade Cunningham was the best rookie* in basketball, the young pieces all improved, they stayed competitive and are locked into bottom three in the NBA. Ideal Pistons tank season achieved. pic.twitter.com/62AjFwmJqv

That’s where things get interesting, as the sportsbooks seem reasonably certain it will be Jabari Smith Jr., a forward from the University of Auburn. He’s as low as +100 on DraftKings and as high as +110 on Caesars and PointsBet.

The second-best odds belong to Gonzaga’s Chet Holmgren, a 7-foot center. His longest odds are at FanDuel, at +210 to go No. 1, all the way down to DraftKings’ +140.

Third choice for the oddsmakers? Paolo Banchero, a forward from Duke. His odds are by far the highest of the three, up to +350 on DraftKings, but as low as +230 at Caesars.

Here’s the thing, though: All three of these prospects can easily be the No. 1 pick, and a lot of it is going to depend on which team hits its 14% shot.

What will the Pistons do?

For instance: The Portland Trail Blazers, who have a 9% chance of grabbing the No. 1 pick, have Jusuf Nurkic manning the center position. Do they go for Holmgren? Probably not. For them, Smith would seem to be the clear choice.

Of course, it’s the Pistons we’re concerned with here, and the question becomes which of the three would be the ideal match with Cade Cunningham and the rest of the Pistons’ young core of talent.

The case for Smith: He’s a 6-foot-10 forward who has drawn comparisons to Michael Porter Jr. on the low end and Kevin Durant(!) on the high end. Scouts are a little worried about his ability to create his own shot, but with Cunningham doing his best Luka Doncic impression, it may not matter.

The case for Banchero: Probably the most NBA-ready of the three, he does everything well. He’d immediately slide into the starting lineup and thrive in the Pistons’ fluid style of play.

.@DetNewsRodBeard believes Paolo Banchero is the right pick for the Pistons if they can get him. pic.twitter.com/sHtCcl48jX

The case for Holmgren: The one unicorn in this year’s crop, he plays defense like Rudy Gobert, can run the floor, and can drain a pull-up three. Some may scoff at his skinny frame, but muscle is coming. Put him at power forward with Isaiah Stewart at center, Cunningham running the floor, and Saddiq Bey and Killian Hayes, and this team can cook at both ends of the court.

Richard Hamilton on what players he would like on the Pistons In this upcoming draft.

All of a sudden, this Pistons rebuild is looking awesome.

Purdue point guard Jaden Ivey is the consensus fourth-best player in the draft (his odds of being drafted first are shortest at FanDuel at +3000 and as long as +7500 on DraftKings). But the Pistons’ point guard needs are … non-existent.

Keegan Murray, a forward from Iowa, would be a fine pick. Think Banchero-lite.

Keegan Murray in a Pistons jersey would make me happy I’m not gonna lie.

As far as the odds go on who will be No. 1, expect it to fluctuate between now and the lottery, and once those balls are drawn, all bets are off. But if forced to choose, Holmgren looks like the best value on the board right now. NBA teams — including the Pistons — might have a difficult time passing up this one-of-a-kind player.