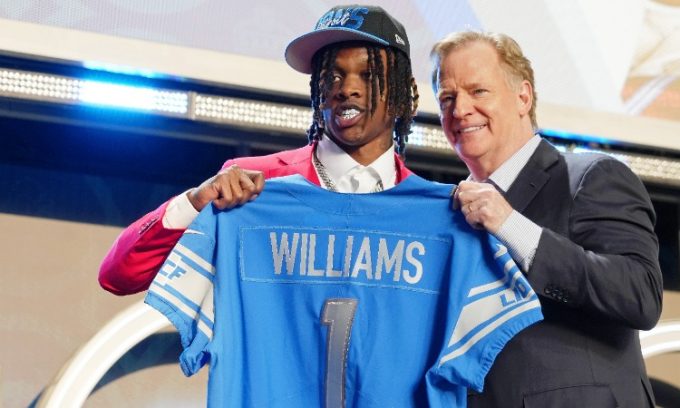 Well, that was unexpected.

Sure, everyone knew the Lions had two first-round picks, and yes, there was definitely the possibility GM Brad Holmes would look at the wide receiver position at pick 32, and uh-huh, there obviously was room to trade up with the 32nd and 34th pick, but … Jameson Williams?

Nah. No one saw that one coming. If anything, the buzz surrounded a potential trade up to grab Liberty quarterback Malik Willis.

But when the Lions moved up 20 spots in the first round by trading with the division rival Vikings — and then grabbed the man who may be the top receiver in the class — well, things got different quickly in Detroit.

Lions have traded up to No. 12 to take Alabama WR Jameson Williams. Arguably the best WR in the draft.

Sure, Williams is coming off an ACL tear, and he probably won’t be ready for opening day, but all of a sudden Jared Goff has a suite of serious weaponry at his disposal: DeAndre Swift, T.J. Hockenson, Amon-Ra St. Brown, D.J. Chark, and Williams, all matched with the 13th-ranked offensive line from 2021 per Pro Football Focus. (Worth noting: PFF notes the line jelled at the end of last year, played without its best player in Frank Ragnow, and has the potential to be an “elite offensive line” in 2022.)

Of course, the Lions also grabbed hometown hero Aidan Hutchinson — arguably the best player in the class, period — to help on the defensive side of the ball, specifically pressuring the opposing quarterback. That was something the Lions weren’t exactly successful at last year, ranking 27th in sack rate.

The Lions when The Jags passed on Aidan Hutchinson pic.twitter.com/X3HcNtISPG

The Lions aren’t done, either, as they have the 46th pick in round two. And while the team still has needs on the defensive side, if Willis or University of Cincinnati signal caller Desmond Ritter is sitting around, either would be hard to pass up.

Odds on who will select Malik Willis
(@DKSportsbook)

Did the oddsmakers notice?

So the Lions had an objectively awesome Day One of the NFL Draft. They are a gritty team, led by a gritty coach. They’re in a division that appears a little more wide open than expected. The Bears are still clearly rebuilding, the Vikings are relying on Kirk Cousins for the fifth straight year to try to lead them to glory, and the Packers are entering the season — at least right now — with the sum total of zero weapons for Aaron Rodgers.

BetRivers tightened up the Lions’ odds overnight to win the Super Bowl, the conference, and the division.

DraftKings, FanDuel, and the rest have the Lions at +1200 to win the division, but BetRivers knocked ‘em down to +1000.

Lastly, earlier in the week, the Lions were at +410 to make the playoffs, and now DraftKings has taken the lead, makingthem +400 to get in.

#Lions HC Dan Campbell showed up to his press conference this morning wearing a racing helmet.

Campbell has been selected as the Grand Marshall for the Detroit Grand Prix on June 12th. pic.twitter.com/1PQPmcu3wu

All in all, it’s clear the arrow is — finally — pointing up in Detroit. And it’s less than three months until training camp starts (!).