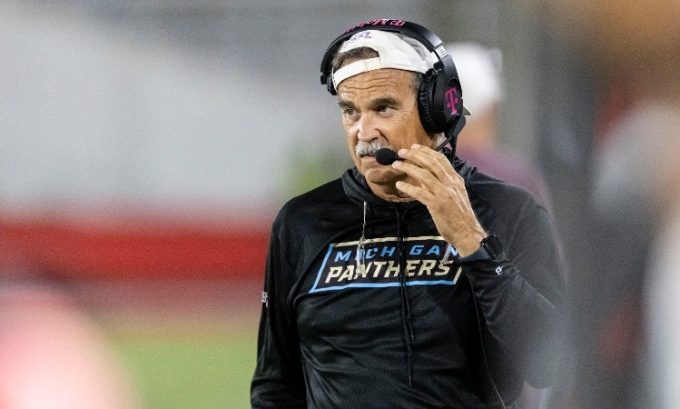 Outside of a 24-0 shutout victory over the winless Pittsburgh Maulers in Week 3, the Michigan Panthers haven’t had much to get excited about this inaugural USFL season.

The sportsbooks certainly didn’t expect Michigan (1-5) to have only one win through six weeks of action. Prior to the start of the season, the Panthers were considered favorites by many to win the USFL championship.

Since then, the odds of the Panthers winning the FOX-backed football league’s championship have plummeted. PointsBet has odds of +5000 on Michigan and the Houston Gamblers (also 1-5) to win the USFL championship. Only Pittsburgh (1-5), at +10000, has longer odds to end up celebrating at season’s end.

Caesars Sportsbook  has odds of +4000 on Michigan winning the USFL championship under former NFL head coach Jeff Fisher. On the other end of the spectrum, Caesars has odds of +150 on the undefeated Birmingham Stallions (6-0) finishing atop the USFL, while PointsBet has odds of +175 on the Stallions taking the title.

The Panthers’ latest loss was a 33-17 beatdown at the hands of the Stallions, who outscored Michigan 20-7 in the second half to pull away.

Michigan entered the season full of optimism after coming away from the USFL draft lottery with the No. 1 overall draft pick, which the Panthers used to select former University of Michigan quarterback Shea Patterson. However, the Panthers’ passing game ranks seventh in the eight-team league, totaling a pedestrian 157.7 yards passing per game. Patterson ranks third among QBs in passing through six weeks of action, completing 60% of his passes for 973 passing yards. But he’s thrown only four touchdowns and has been intercepted five times.

The statistics representing the Panthers’ ground game can also be deceiving, considering the Panthers rank second overall with 156.5 rushing yards per game and have three players ranked among the top 15 rushers in the league.

Reggie Corbin is the third-leading rusher in the USFL with 408 rushing yards, including a pair of touchdowns. Stevie Scott III, who was a standout ballcarrier in college at Indiana, ranks 14th in the league with 177 rushing yards, and Patterson ranks 15th overall in rushing with 171 yards. Yet Scott and Patterson have been limited to a pair of rushing touchdowns apiece for an offense that has been outscored113-104. Only the Maulers have scored fewer points (76) than the Panthers.

Placekicker Cole Murphy, who has handled kicking duties in two of Michigan’s six games, has recently been a bright spot for the Panthers. He’s made all three of his field goal attempts, including a league-best 56-yarder against Birmingham. He’s also been perfect on four extra-point tries.

Murphy replaced Michael Carrizosa, who struggled with the kicking duties during the season’s first four games. Carrizosa, who missed his first three field goal tries of the season, cost the Panthers a chance at a victory over Philadelphia in Week 4 when he missed a 21-yarder.

The Panthers are in search of more point production than their kicker’s strong leg heading into the final month of the regular season. With only four regular season games remaining, including a meeting with the New Orleans Breakers (4-2) on Saturday night, the Panthers can’t afford to falter if they hope to have any chance at making the USFL postseason.

The USFL regular season games are all being played in Birmingham, but the three playoff contests will be played in Canton, Ohio, at the Tom Benson Hall of Fame Stadium. The title game is scheduled for July 3.