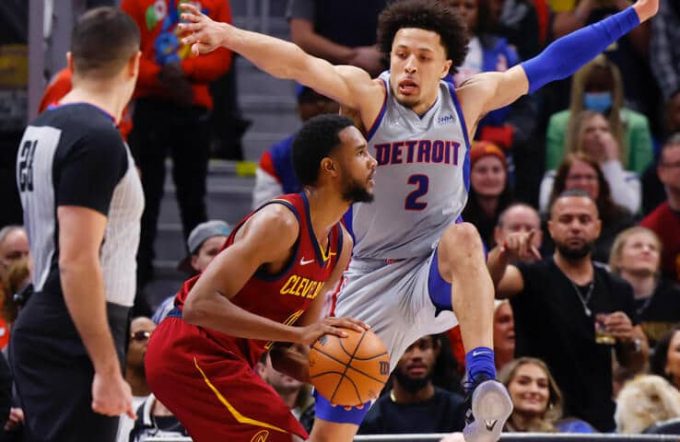 When last we checked in on the Pistons, they were in the midst of a winning January and seemed a pretty sure bet to trade their leading scorer, Jerami Grant, to a contender for some pieces that would be more useful to their ongoing rebuild.

They then proceeded to lose 12 of their next 13 games and hold on to Grant. In other words, Pistons gonna Piston.

But with teams such as Detroit, which heads to the nation’s capital Tuesday as a 4-point underdog against the Wizards at WynnBET (o/u: 218, Pistons +155 on the moneyline), silver linings must be sought out. And, lo and behold, the Pistons have won three of their last four games — all against playoff-bound teams — with Grant back from injury and the team’s newest member, Marvin Bagley III, fitting snugly into the rotation as a capable pick-and-roll partner for Cade Cunningham.

Given how much drama he endured in Sacramento, it’s easy to forget that Bagley — who, infamously, was selected with the second pick, before Luka Doncic and Trae Young, in the 2018 NBA draft — is only 22 years old. He showed flashes of potential with the Kings, but was generally considered a mess, and was ultimately discarded in a four-team deal in which the Pistons only had to surrender Trey Lyles and a second-rounder to acquire Bagley.

Bagley’s first three injury-addled seasons with the Kings saw him average north of 14 points and 7 rebounds. So there’s definitely talent there, and the fact that he was purged by what’s generally regarded as the NBA’s worst-run organization is grounds for a mulligan.

“It was a good, low-risk move for [the Pistons],” said WynnBET Senior Trading Manager Alan Berg. “They’re not gonna give up too much to see what they can get out of him. Maybe this change of scenery could help kickstart his career.”

“I find these trades fascinating — guys who are high picks somewhere who were given up on pretty early,” said Robert Kara, a sports trader for FanDuel. “Like Markelle Fultz, sometimes these guys just need a new place to play. Bagley looks like he fits [Detroit’s] system well. I’ve been pretty impressed with his play so far.”

In fact, Kara, an unabashed 76ers fan, admitted that he “wanted the Sixers to take a flyer on Bagley as well.”

To this end, Jay Croucher, PointsBet’s head of trading, said, “When you’re in a position like Detroit, you’ve got the capacity to make those trades. I think it’s good to take flyers on guys who’ve played in Sacramento.”

‘Wasn’t really a market’ for Grant

In the curious case of Grant, his lack of movement by deadline day likely had less to do with the Pistons considering him a crucial part of their future than it did with “the interest level from other teams,” observed Kara.

“I think most teams view him as a guy who needs high usage. It doesn’t make sense for a guy like that to be added,” Kara said. “There wasn’t really a market for him. He’s been clear, too: He wants to go somewhere where he’s the number one or number two option.”

As the Pistons’ leading scorer, Grant still has the stature he seeks — on a team with the second-worst record in the NBA (after Orlando). But with the emergence of younger players like Saddiq Bey and Cunningham, his hold is somewhat tenuous. And with the Pistons well-positioned to earn a high lottery pick that could find them choosing from a draft class that’s likely to include freshmen Paolo Banchero (Duke), Chet Holmgren (Gonzaga), and Jabari Smith (Auburn), Grant may become an afterthought at some point next season.

“Cade Cunningham I see as the only main piece there,” said Kara in assessing Detroit’s draft prospects. “You take the best player available. I personally like Jabari Smith, but I’m not 100 percent confident that he’s the best pick in the draft.”

“They sound like they like Holmgren a lot, just because of his versatility, ability to hit threes, long wingspan,” Berg said of Gonzaga’s rangy 7-footer. “I think you’re gonna get a great player no matter where you land there.”

Rookie of the Year race ‘essentially over’

As for Cunningham, he’s been extraordinarily consistent after a rocky start, averaging upward of 15 points, 5 assists, and 5 rebounds on the season as an extra-large floor general. But in spite of these impressive numbers, Cleveland’s Evan Mobley is now considered a shoo-in to win Rookie of the Year (with odds ranging from -715 at PointsBet  to -550 at FanDuel) thanks to his elite defensive performance and the Cavs’ surprise positioning as a likely playoff team.

“We want bets on the other players because we think the award is essentially over,” said Berg. “Mobley has been incredible. They’ve just gotten immediate effects from drafting that guy. That’s the part Cunningham doesn’t have going for him — the won-loss record.”

If you’re still a Cunningham believer, however, he can be had for a 9/1 price at WynnBET and FanDuel, while PointsBet is a tad higher on the No. 1 pick’s dark horse candidacy with an 8/1 offering.

“I think Mobley is close to a lock. The guy with the best chance of catching him is Cade, just because after a really rough start, his numbers have gotten better and he has the capacity to put up huge counting stats,” said Croucher. “There’s just not a lot of season left, but if anyone’s gonna make a charge, it’ll probably be Cade.”