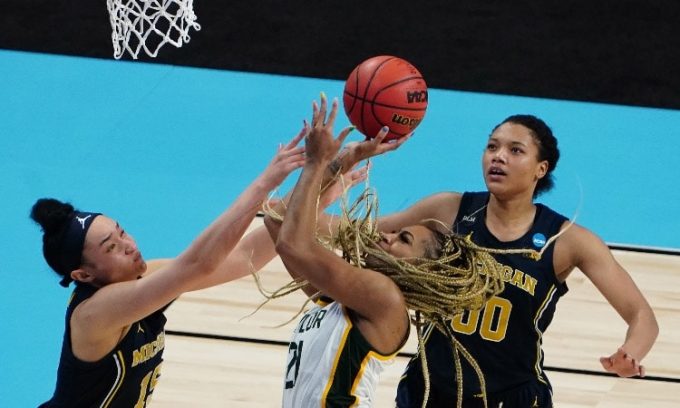 The third-seeded Wolverines (24-6), led by All-American forward Naz Hillmon, will attempt to move one step closer to that goal when they take on No. 10 seed South Dakota (29-5) in a Sweet 16 matchup on Saturday at INTRUST Arena in Wichita, Kansas.

A victory over South Dakota would mean facing the winner of No. 1 seed Louisville vs. No. 4 seed Tennessee in an Elite Eight encounter on Monday.

The road to the Final Four

Headed to another Sweet Sixteen with the best team! 🎥 https://t.co/uJKh5ouBuM

In order to keep hope alive, the Wolverines must get by a surprising South Dakota squad that’s making its very first appearance in the Sweet 16. DraftKings has Michigan as a 4-point favorite over the Coyotes, while FanDuel and BetMGM have the Wolverines as a 4.5-point favorite. The sportsbooks have the over/under at 123.5 points.

Michigan, which opened the NCAA Tournament with a 74-39 drubbing of American, has advanced to the women’s Sweet 16 for the second year in a row.

Playing to their strengths

Hillmon, who averages 21.3 points and 9.6 rebounds, is considered by some as the greatest player in program history. The 6-foot-2 senior produced her school-record 50th career double-double when she poured in 27 points and pulled down 11 rebounds in Michigan’s 64-49 victory over Villanova in the second round of the NCAA Tournament.

Hillmon’s activity around the rim has also helped the Wolverines out-rebound their opponents, 1,219-901, for the season.

Leigha Brown, a 6-1 senior guard, is Michigan’s only other player who averages double figures. She’s been good for 14.4 points for the season, and is averaging 15.5 points per game during the NCAA Tournament.

However, Emily Kiser (9.5 ppg, 8.1 rpg), Maddie Nolan (9.1 ppg), and Laila Phelia (8.6 ppg) have comprised a solid supporting cast for a Michigan team that shoots 45% from the field. Nolan has knocked down a team-leading 64 3-pointers while shooting a team-best 42% from behind the arc. Danielle Rauch (5.7 ppg) has tossed in 27 3-pointers, which is second-most on the team.

Michigan faces a South Dakota team that pulled off a pair of major upsets to get through the first two rounds of the tournament. They knocked off No. 7 seed Mississippi, 75-61, and followed that up with a 61-47 shocker over No. 2 seed Baylor.

South Dakota has competed as a Division I program only since 2011.

South Dakota is a team that has been particularly good on defense, forcing opponents into 18 turnovers per contest and averaging nearly nine steals per game. Lamb and Sjerven have recorded 56 and 54 steals, respectively, to lead the team.