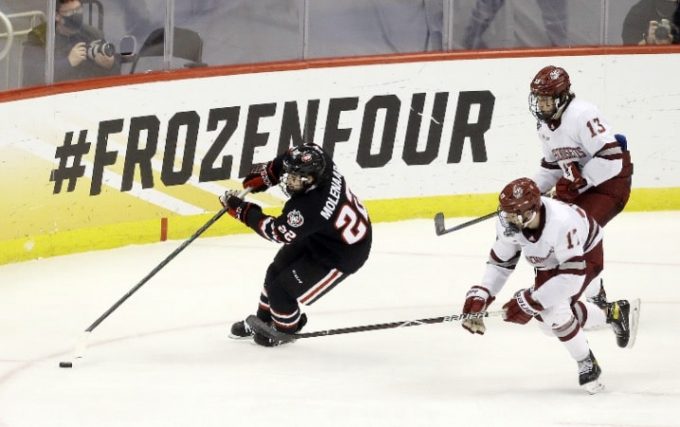 The state of Michigan is well-represented in the NCAA Division I men’s ice hockey tournament.

The University of Michigan, Western Michigan, and Michigan Tech are among the 16 hockey programs in this year’s postseason competition. The Wolverines are the overall No. 1 seed, and DraftKings has odds of +275 on them prevailing as NCAA champions. Michigan (29-9-1) will take on No. 4 seed American International (22-12-3) at the Allentown Regional on Friday.

Western Michigan is the No. 3 overall seed, and DraftKings has odds of +800 on the Broncos advancing through the tournament to claim the national title. Western Michigan (25-11-1) is the top seed at the Worcester Regional and will face No. 4 seed Northeastern (25-12-1) Friday.

Regional winners advance to the Frozen Four, which takes place at T.D. Garden in Boston April 7-9.

Wolverines favorites to win it all

Beniers, the Big Ten scoring champion and an All-Big Ten first team performer, leads the way after scoring 19 goals and recording 22 assists. He registered a conference-best 10 power play goals. Brisson, a Big Ten second team selection, proved to be nearly as threatening on the ice, with 19 goals and 18 assists and a team-leading six game-winning goals.

Johnson (8 goals, 27 assists) and Bordeleau (10 goals, 23 assists) have also delivered routinely for a Michigan team built to win a national title. Owen Power has also been an integral part of the Wolverines’ prolific scoring attack, registering a team-leading 24 assists to go along with three goals.

Sophomore goalie Erik Portillo has been steady in net, recording three shutouts, and enters tournament play with a 29-9-1 record. He owns a .928 save percentage and his 1,022 saves rank fourth in the nation.

Michigan faces an American International squad that earned a spot in the tournament by winning the Atlantic Hockey Association Championship. Blake Bennett gives the Yellow Jackets a chance in every match. He’s scored a team-best 18 goals and added 14 assists for 32 points. Chris Dodero (13 goals, 16 assists) and Justin Young (11 goals, 18 assists) have helped to provide offensive balance for the Yellow Jackets.

Western Michigan in the hunt

DraftKings lists favored Western Michigan at -115 on the 1.5-puck line going up against Northeastern.

.@WMUHockey getting a workout in this morning preparing for @GoNUmhockey. Game is Friday at noon on @ESPNU in Worcester, MA pic.twitter.com/uLLXXJsAg8

Western Michigan goalie Brandon Bussi enters the matchup with Northeastern owning a 2.60 goals-against average and a .910 save percentage.

Northeastern leads the all-time series with Western Michigan at 3-1-1. Northeastern’s Aidan McDonough ranks among the nation’s top goal scorers, topping the Huskies with a team-best 24 goals.

Tommy Parrottino (17 assists, 11 goals) and Logan Pietila (13 goals, 10 assists) have also been dependable on the offensive end for the Huskies.