For many lottery players the idea of pooling resources in order to improve odds is very appealing. While usually the cruel nature or probability still means nothing comes of these endeavors, occasionally the strategy pays off. It certainly seems to be paying off at the moment, as recently weeks three separate lottery clubs in Michigan have won millions of dollars in lesser wins from Mega Millions.

At the height of the recent craze surrounding the record-breaking Mega Millions jackpot, several lottery clubs purchased an increased amount of tickets. Two of these clubs – one made up of 21 co-workers from an office in Hudsonville, and the other a group of ER nurses – both managed to draw the five white numbers on the October 23 drawing but miss the Mega Ball. A third club from Detroit only managed to win $18 during the big frenzy, but decided to try to parlay that into a second attempt at the smaller $40 million drawing on October 26.

They then achieved the same results, all five white balls but no Mega. As the second most difficult outcome in the game such a ticket yields an automatic million dollar prize. This means the 36 members of the three clubs will all be enjoying wins varying from about $50,000 to $200,000 as a result of pooling their ticket purchases.

Instant games can also yield jackpots for lottery clubs, as a two-person club in Monroe County just split a $4 million win on a Max Money scratch-off.

Individuals who buy their own tickets outside of clubs are also doing quite well, like a woman from Flint hitting five numbers with a Megaplier for her own solo $2 million win. Since another player also won $1 million in the same drawing, that’s more than $6 million of going to Michigan lottery players in the last few weeks. Meanwhile the big jackpot has still not been claimed.

Michigan’s online lottery is again running a promotion to encourage purchases of Online Game Cards from lottery retailers, offering a chance at a 60% deposit match (like so many online gamblers in other markets are so fond of).

Online Game Cards have been available in Michigan for years, one of several options for depositing money in your account. While they arguably limit the convenience of online play they are suitable for people who either do not wish to use their credit/debit cards or ach transfers or do not have easy access to such digital means. Instead a one-time cash purchase in person of $10, $20, $50 or $100 gives you a code to credit the amount to your Michigan Lottery account.

The online lottery has also introduced a new seasonal game, Winter Keno. The game plays exactly the same as the standard Instant Keno available on the site, with a simple snowy graphic and sound scheme superimposed. 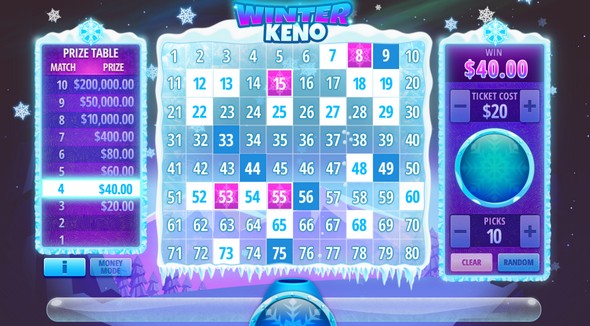 Friday night will see a Fantasy 5 drawing with an expected jackpot of about $247,000, and a Lotto 47 that is nearing $2.1 million. Also, the Mega Millions jackpot is back up to $122 million.

On Saturday there will be a Powerball drawing also over $124 million.